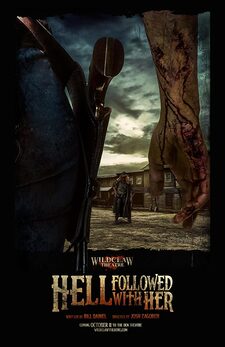 Hell Followed With Her
Presented by Wildclaw Theatre

​When I started mentioning to people I was going to see a zombie western show, I noticed their faces light up. Who wouldn't love a mash-up between beloved zombies of our favorite shows, comics, and video games and cowboys of spaghetti westerns, with those sweeping panoramas of the wild west? But just how do these genres come together, and more importantly, how does it translate to the stage?
Those ambitious risk takers at Wildclaw Theatre are here to blow your world apart. Hell Followed With Her is a world premiere written by local playwright, Bill Daniel and directed by the incomparable Josh Zagoren. The show has a rather large ensemble cast...
Read More 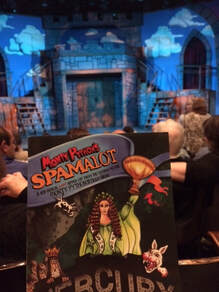 Monty Python's Spamalot
presented by Mercury Theater Chicago
The lovely Mercury Theater Chicago is located in the heart of the Southport neighborhood surrounded by a plethera of restaurant options and cute boutiques. The space is ideal for comic musicals and seats 290 people, with the adjoining Venus Cabaret Theater (seating 80). Farm-to-table dining is available at its adjoining restaurant, Grassroots. You are also welcome to bring over alcoholic beverages from the restaurant for the performace, just make sure they are in cute little to go cups, and be sure to clean up after yourself (as a former theater usher, I cannot stress this enough!).
​Unless you live under a rock, you've most likely heard of the hit 1975 film "Monty Python and the Holy Grail". Well, what could be better than ​...
​
Read More